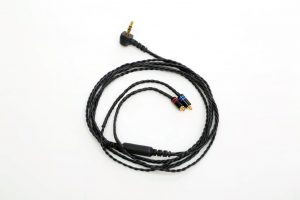 This quality which is aiming the “ ultra ” is better than the expensive re-cables of other companies for this low price.

Grounds of the characteristic

DIP FORMING-type anoxic copper wire is used for a conductor.
For example , the cable for pure audio systems has a big influence that structure gives for sound quality than a conductor. However , it is sure of using conductor is better way because the earphone re-cable cannot have a complicate structure. Only the copper is used for the cable for pure audio systems even it costs $100.

The silver wire cable will appear if it exceeds $10 , 000 or more , but is is no doubt that basically copper is used. ⭐︎ However , the earphone re-cables that are using only copper are low-price range. For those of more than a certain price , we use conductors that are incredable in the audio world , such as silver-plated hybrids on copper and ultra-expensive ones , gold-plated on silver. That shows earphone re-cables with limited thickness are required for the conductors. Also , current audio copper wires are merely the arrangement of originally copper wire from a major electric wire company. However , they treat as if it is a gift from God.

What is a DIP FORMING type oxygen-free copper wire

In 1960 , It is developed by American company GE. However , it was pushed by the copper wire of mass production which was inexpensive and was stopped manufacturing in 1969. After that , the DIP FORMING manufacturing furnace was handed down to Japanese electric wire manufacturers and is still being produced as an internal wiring of automobiles. The cable that has been used this conductor in the past is an American Western speaker cable. Even it has been 50 years , many audio manias have kept talking that the Western cable is the best. This exactly shows how useful DIP FORMING ’ cable is. In briefly , DIP FORMING is the cable made by hand without adding any chemicals. Furthermore , there is no difference modern copper compressing copper wire called HSE to remove impurities.
no chemicals = There is no pain in the crystal structure = Transmit signal more faithfully
It is sure that the ultimate conductor for audio cable was created.

The circumstances leading to the development of the earphone re-cable ( the point I want to say the most )
One of the earphone mania told that “ genuine cable is the best for the earphone because that is the sounds the developer intended. Our view→This is for all industrial products. The costs for the products is decided as it is famous company. Thus , the products that developer is aiming are something that is made within the cost range. On the other hand , there is no doubt that the user raises the performance of the product by modifying it. A representative example is the genuine cable of the product in the pure audio world. In the pure audio world , it is not called a genuine cable but an attached cable. Even though the earphone headphone field is still in fashion to some extent , I think that it is a simple reason that the cable is attached to earphone headphones from the beginning because it is not sensitive to replacing the cable as much as the net audio world. There is no difference in sound quality equivalent to the included cable. Neither media nor dealers are aware of this point=Earphone headphone cable is not sensitive to changing cable as much as the net audio world , so
I’d like you to appeal more